Although this month was full of announcements by the Chilean Government regarding entry to the country, the territory's destinations made headlines on their own merit in the world's leading media. 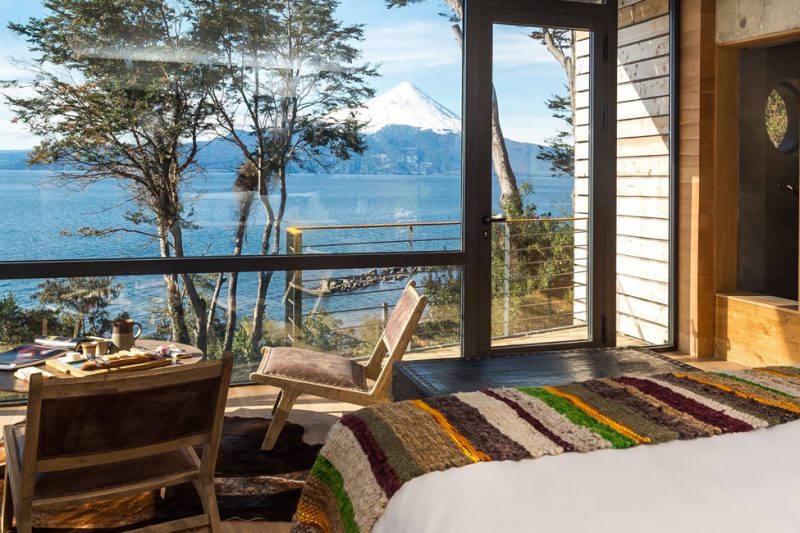 August 2022 was a month replete with news about Chilean tourism and information massively published in the international press.

The first headline to arrive overseas was the reopening of Rapa Nui for foreigners. The arrival of the first tourists to the island was widely shared around the world with a special emphasis on France, United Kingdom, United States, Spain, Brazil and Argentina, among other countries.

The arrival of the first tourists to the island was widely shared around the world with a special emphasize on France, United Kingdom, United States, Spain, Brazil and Argentina, among other countries.

The France24 news network reported: “A big colorful banner with the word Iorana! —the traditional greeting in the native language of Rapa Nui— received the 228 tourists who arrived on the first commercial flight from the Chilean-Brazilian airline LATAM.” On their side, Le Figaro —another French media— uploaded a video with the arrival of the flight and the first impressions of the inhabitants of the island.

In the United Kingdom, The Independent reminded tourists that Rapa Nui has special requirements for its entry, a similar stand that the American Bloomberg took.

In addition to this, changes were announced to the country’s entry measures, eliminating vaccine standardization and the C19 declaration., information that was even shared by the official Chinese state agency Xinhua.

Regarding the announcement, the specialized tourism site Travel Pulse highlighted the flexibilities of the entry measures which took place after the Chilean Ministry of Health lowered the country to Alert Level 1, the lowest level of threat.

Beyond the contingency, Chile was a headline in the international press in August 2022 as a destination on its own merit, especially in the luxury segment.

“A room with a view to the most impressive volcano in the Chilean Patagonia”, was the title chosen by El Mundo‘s article from Spain to dedicate an entire report to the beauty of the Osorno Volcano’s surroundings. Among the mentioned experiences, the Iberian media recommends traveling the valleys, waterfalls, fjords, mountains, forests, and towns from the Los Lagos region on bike, horseback, 4×4 or by trekking, as well as excursions by seaplane or by helicopter around the Cochamó Valley.

The magazine Travel +Leisure decided to go even further south, which focused on the exclusive navigation between Puerto Montt and Puerto Natales. This is because of the four-day cruise ship trip which travels around the wonders of the Chiloé Islands and the national parks of Patagonia. It also has rooms with a private bathroom, yoga, and tai chi classes, among others.

Santiago did not want to fall behind and showed its luxuries, this time in the Signature Luxury Travel (Australia). The journalist Andrew Conway wrote in his column: “Elegant boutique hotels, cosmopolitan restaurants and colorful street art make Santiago one of the coolest cities in South America”.

On his journey around the Chilean Capital, the journalist focuses on the multicultural aspects of its neighborhoods —Sanhattan (Financial District), going through Lastarria, Mercado Central (Central Market) and Barrio Brasil (Brazil Neighborhood), among others—, high-level cuisine and the vast culture this city has to offer.

Other “luxurious” mentions of Chile in the month were in NewsBreak, Yanko Design, Matador Network, CEO World and Ocean Home. 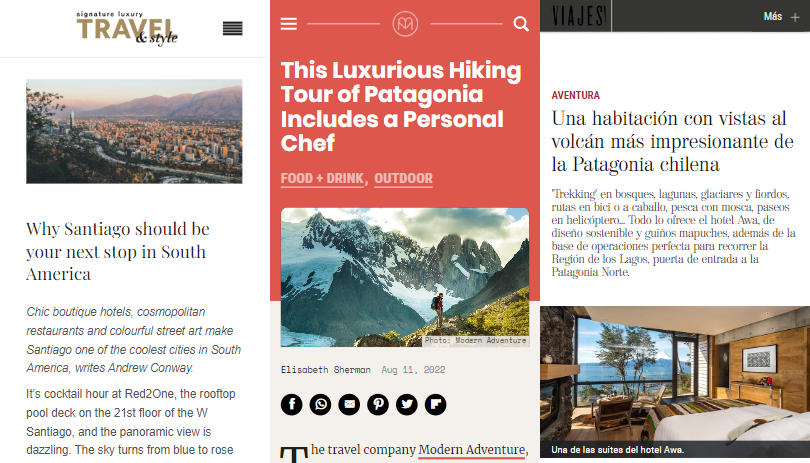 During August 2022, several international media highlighted the attractions from Chile on their “best places to visit”, which encompass many subjects like cuisine, adventure, and disconnection.

One of the most important titles was given by National Geographic, media which proclaimed Chiloé has “The 20 best islands in the world for a trip full of adventure”. But this was not the only title won by the Chilean southern zone: Forbes recognized Patagonia as a unique destination for sighting wild felines. Meanwhile, The Travel catalog the area as one of the “10 most beautiful places in the world in 2022”.

Other titles that were awarded to Chile this month were:

Along with reporting the reopening of Rapa Nui for tourists and the measure changes for entry into Chilean territory, the Argentinian media-maintained Chile as an international destination during August 2022.

One of the topics of interest was the status of the border crossings, as well as the advances of the Cardenal Samoré complex (border crossing point). The Diario Andino reported that with the new infrastructure, it aims to oversee traffic of at least 8,000 people per day.

While in the city of Mendoza, the focus was on shopping tourism. The local media El Sol and MDZ ended this month with news pieces dedicated to comparing the prices of clothes and technology between Chile and Argentina, selecting the best sales for the trans-Andean that want a shopping getaway to Santiago.

Download the clipping here with the highlighted Chilean appearances in the international media during August 2022.