Wines, snow, desert, and Rapa Nui. Discover here some of the references of our country in foreign media during May. 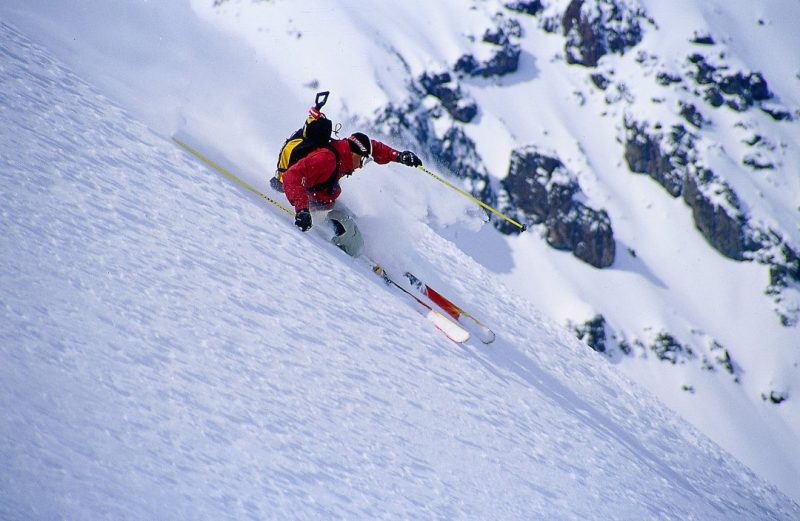 During May, Chile was again highlighted in several international media with news related to destinations and attractions such as Rapa Nui, the Atacama Desert, and the upcoming snow season. Check out this complete article and find out about some of the references that make Chile a unique place in the world.

The Atacama Desert continues to be highlighted in the international press. This place that seems to be from another planet does not cease to impress the foreign media. The famous Spanish media “La Vanguardia”, published an article called “Atacama, the perfect desert: geysers, volcanoes and salt summits“, where this iconic national destination is highlighted in detail. “This spot is breathtaking for its beauty and because it is advisable to walk slowly and breathe deeply at more than 4,000 meters. It has a sky so clear that it is perfect to host the largest astronomical observatory on the planet”.

Another famous international travel magazine “Travel + Leisure“ published an article highlighting the benefits of the Atacama Desert, which was titled “This South American destination has luxury accommodations, impressive landscapes, and some of the best places to observe the stars in the world”. 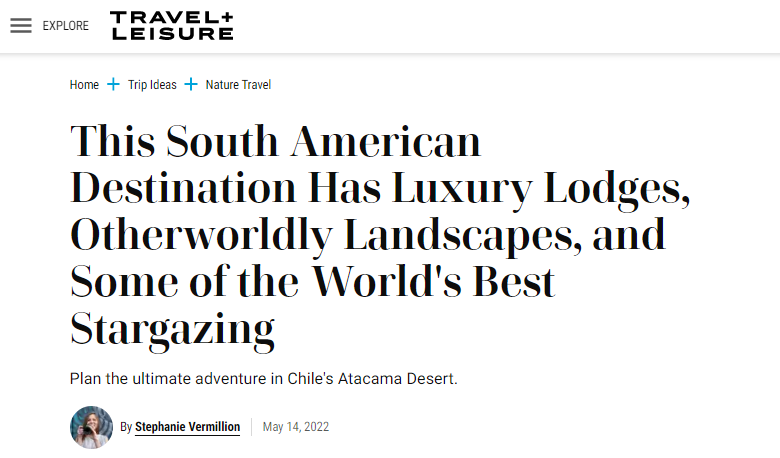 A piece of news that was highly mentioned in different international media such as “La Vanguardia”, “El País” from Spain and “France 24”, was the one in which the cooperative “Ayllú”, of Atacameño origin, was highlighted, where different vineyards survive at an altitude of more than 3,000 in the Atacama Desert. “In 2021, Ayllu received 16,200 kg of grapes and produced about 12,000 bottles. In 2022, they received 20,320 kg and project a production of up to 15,500 bottles.”

Following the wine route in our country, “The Travel”, from the United States, highlighted the wealth of the Maipo Valley. Here they made a list of the must-see destinations to experience wine culture at its best, selecting “The 10 best wine regions in the world (and when to visit them)“. The famous Maipo Valley stands out on this list and is called the “Bordeaux of South America”. “The Maipo Valley is a red wine-producing region, especially known for its Cabernet Sauvignon. Merlot and Syrah are also common grapes in the Maipo Valley”.

Because the snow season in our country is just around the corner, there have been several references to Chile in the international press to plan a perfect season. This is why the French media “Le Figaro“ highlighted different ski resorts throughout our country. “El Colorado is the closest to Santiago, the Chilean capital. Valle Nevado forms, with La Parva, the largest ski area in South America. Portillo is the oldest resort beach on the South American continent, the cradle of Chilean skiing. In the Pucón region, you can also ski around the Villarrica volcano, which is a natural paradise ideal for snowboarding”.

In addition, the Brazilian market, precisely from “Mundo RH“ and “Viagem e Turismo“ also made different references to the different ski centers and the ideal conditions that are developed in Chile during the winter season. Both media went on a tour highlighting Chillán, Corralco, Portillo, and Valle Nevado. “The Chillán volcano ends up fulfilling a double function: its snowy slopes are the scene of downhill skiing and the temperatures in its interior supply hot spring pools…”. 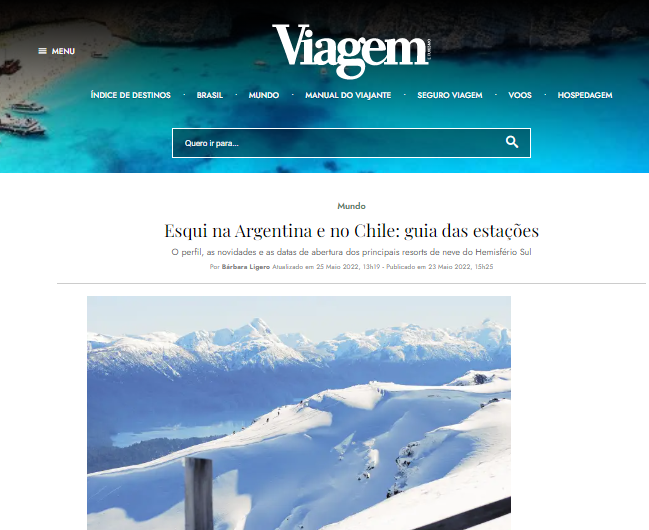 In other relevant news of the month, the reopening announcement of Rapa Nui went around the world and reached high relevance in media such as “El Comercio” from Peru, “Travel and Tour” from the United States, and the “Touri News” from Spain.